What does it mean for music to be "in a key"?

Remember I said that you had 50 pitch patterns to learn to master popular music? What I meant was there are about 50 basic patterns at work. But each of these patterns can be played in any key.

What does it mean for something to be in a "key"? This is a complex issue with many facets which we will be uncovering gradually as we go through this entire program. For now, think of it this way.

No song has just one note in it. A song is a swirling mass of notes. But somewhere in that mass is one note that is acting as the anchor for the whole thing. Once you have identified which note is acting as that "nucleus note", you know what key you're in. Since any of the 12 notes can be acting as that anchor, there are 12 keys to play in. Later you will learn that there are both major and minor keys and various modal varients, but that's how you want to look at it for now.

If all 50 patterns can be played in all 12 keys, than the actual number of patterns you have to learn is 600! But don't panic! It's not so bad. If you check out my musical sliderule, what you see is that each one of these 50 patterns is basically structured the same way no matter which key you play it in. You will come to understand that these patterns are spatial relationships between notes that can be translated into any of the 12 keys.

So wouldn't it be nice if we had an alternative system for naming the notes that treated music as if there was only one universal key to play in? Then we could simply look at the structure of each pattern without having to initially memorize it's 12 alphabetic variations. We have such a system. It's called the musical number system. But how does it work? Many people waste decades worth of time trying to understand music without getting this system sorted out once and for all. So here's my question...

You've heard of C7 chords....1-4-5 progressions ... major 3rds ... perfect 5ths etc. You know there is a number system to name the notes making it 11 times easier to memorize your pitch pattern spellings (because it treats music like there is 1 key instead of 12). But how does this system work? To what do these numbers correspond? It's not quite how you might think! The answer is they number the notes in a Major Diatonic Scale. 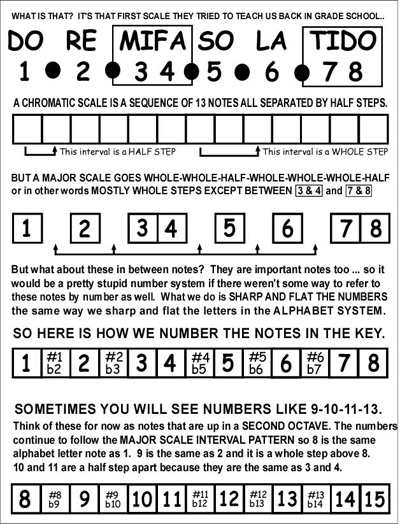